I wanted to share my thoughts of the key learning’s from Microsoft WPC 2015. It is now more than two weeks since we had the magnificent Microsoft Worldwide Partner Conference in Orlando, Florida. Since the conference, I have been busy working with follow-up and some projects. During the past two weeks I have also actively been pondering about the messages that Microsoft and Microsoft executives brought to thousands of Microsoft partners from all over the globe.

Let me first provide some feedback on the venue that Microsoft had picked for this WPC.  I have been part of 11 WPC events and I even used to to be part of WPC partner advisory council way back so I have seen quite a few conferences and what goes into those. This conference blew me away. Let me explain why.

First of all, I was lucky enough to be at the hotel adjunct to the convention center. I could pretty much walk in every day and get to the main expo and community lounges and connect tables. Everything seemed to be very close, at least what I had to do during the week. I also noticed that the food delivery and arrangements worked really well, there was no hick-ups at least when I had my meals. I also felt that the celebration venues were extremely well arranged, I never felt that it was too crowded and that there was a pressure to “move on”. Cabs worked well during the week as well as transportation. It will be hard to beat this conference when going to WPC 2016 in Toronto, even if Toronto is a fabulous city. Well done team Kati Quigley and team! 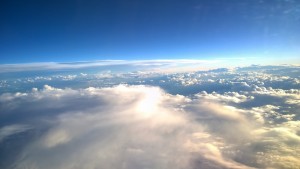 Let’s talk about what we learned during the week. The move to the cloud has accelerated and I can see that in the amount of calls and discussions I am having with end user organizations. This applies especially to Office 365 discussions. Most of the solution inquires are directed towards Office 365 and this puts both system integrators as well as software vendors in a position where they really need to rethink their business model. I was able to sit in on session where a case study company CEO explained his transition from a traditional SharePoint system integrator to an Independent Software Vendor (ISV). The transition has been brutal, but something that had to be done. Instead of having 60+ developers, the company has now less than 20 and profitable. No more worries of having people on the bench or having to worry about the next large system integration deal. Now the focus is in selling and marketing, creating a sales velocity that enables the company to increase its subscription revenue. The discussion was breathtaking to say at least. I have worked with system integrators and know the business model, but I think this really hit me hard to realize that the market really has changed and if you do not change your business model, you are just going be gone… period. I have been preaching about this change in my blogs for almost 3 years now so for me this is nothing new, but it is a new reality for many traditional players. 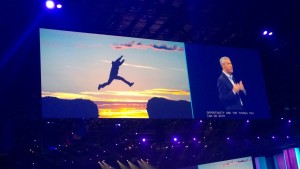 When looking back at the keynotes and the message that Microsoft wanted to bring to its partners was very clear. System integrators should focus on creating IP themselves and transform its business model to a recurring revenue model with a focus on verticals or specific functionality the brings value to the workflow or use case. This is one of my favorite topics when I run my business modeling exercises with companies, both multi-billion ISVs and small start-ups. My question is always: ” Define to me what your solution is going to do for me. What are the customer jobs, pains and gains that you will cover?” This has been so powerful approach and in some cases is a wake-up call for many organizations. It is hard and difficult, and it should be. I just read yesterday that if you are building a product like your first MVP (Minimum Viable Product) and do not feel ashamed of it, you have failed. That is an interesting thought and you might want to reflect on that statement.

Before the WPC event, I heard many Microsoft partners to ponder on whether there would be some kind of big announcement from Microsoft and what Microsoft’s CEO Satya Nadella would be saying during his keynote. I posted a note on my Facebook that Mr. Nadella’s keynote was exactly what I expected from him. He gave the direction for Microsoft partners, where he wants partners to  focus on and what kind of role Microsoft will play in the future. The rest of the executive keynotes went into more detail of each of the key topics that Mr. Nadella talked about.

Microsoft is still a company with huge amount of revenue coming from its channel. It was obvious to me that Microsoft ecosystem has listened to the messaging from Microsoft from the past 3 years and have moved on to the cloud model. What is different now is the re-emphasis on independent software vendors (ISVs) by Microsoft and this is of course music to my ears as this is what I have been doing for the past 20+ years. I know what it takes to build a products business, what it takes to take your solutions to the channel and I also know what you should not do. I have also done mistakes and had some wrong assumptions during my career. Creating a product solution will be a challenge for system integrators as project-related business is not the same as products business. 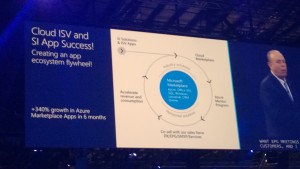 What I am also excited about is the way Microsoft wants its partners to build its solutions. Mr. Nadella concluded as follows: “So what Office 365 represents, what Dynamics represents, we want to bring these different products today into one set of services, which are extensible”.

I want to emphasize the word extensibility. If you have an interest to learn what is happening in the Office 365, I would highly recommend you track/watch what Vesa Juvonen, Senior Program Manager within Office 365 engineering team is doing.  The world of tomorrow will be about ecosystems and how partners and software vendors collaborate with their solutions, utilizing APIs from platforms such as Office 365, Dynamics CRM and Microsoft Azure. I am extremely excited about this trend and movement as it provides huge opportunities for Microsoft partners to build exciting productivity solutions that extend the platforms that Microsoft is investing billions of dollars. Software vendors should use these investments as the springboard to build solutions/applications that provide specific functionality or solutions to different vertical domains. 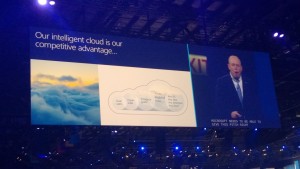 During the keynotes, Mr. Nadella talked about “Intelligent Cloud” and this is also especially interesting to me as it combines things such as IoT (Internet of Things), analytics, machine learning etc. I have written about these topics before and seen real-life examples what Microsoft partners have done.

There has been some “chatter” about the Dynamics product line since Microsoft did some major organizational changes, but Mr. Nadella tackled these in his keynote. Dynamics is a key product line in Microsoft’s future and this was of course good news for Microsoft partners. In my mind the Dynamics business has always been “an island of its own”, but it is obvious that Mr. Nadella is changing this. We can see this already in closer collaboration with engineering teams. My Dynamics CRM 2015 Online (May 1 release) has much tighter integration to PowerBI and the integration to OneNote is amazing. My TELLUS instance was upgraded a couple of weeks ago and I could not be happier of what I can do to track my business. 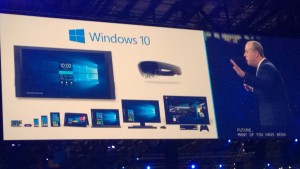 And finally, Windows 10 was officially released 29th of July and there is no question in my mind that there is excitement again around Windows. This is by far one of the biggest releases and what have changed is that Microsoft has released a development model where you build your app once and deploy it to different devices. This “universal app model” is the response from Microsoft to be able to support what people need, whatever devices they have and also trying to minimize the work that developers have to do in supporting all of these different things. This is just the start in my mind, you will see lots of new things coming from both Microsoft as well as partners.

I have fortunate to be in the forefront seeing tens of different Microsoft partners working on exciting things and the development opportunities and excitement is back, no question about it. My recommendation for you is to really dig into what WPC 2015 brought to the ecosystem, spend some time reflecting how you and your company can benefit of what Microsoft has developed and then just start working on it by creating something that will benefit end users and organizations.